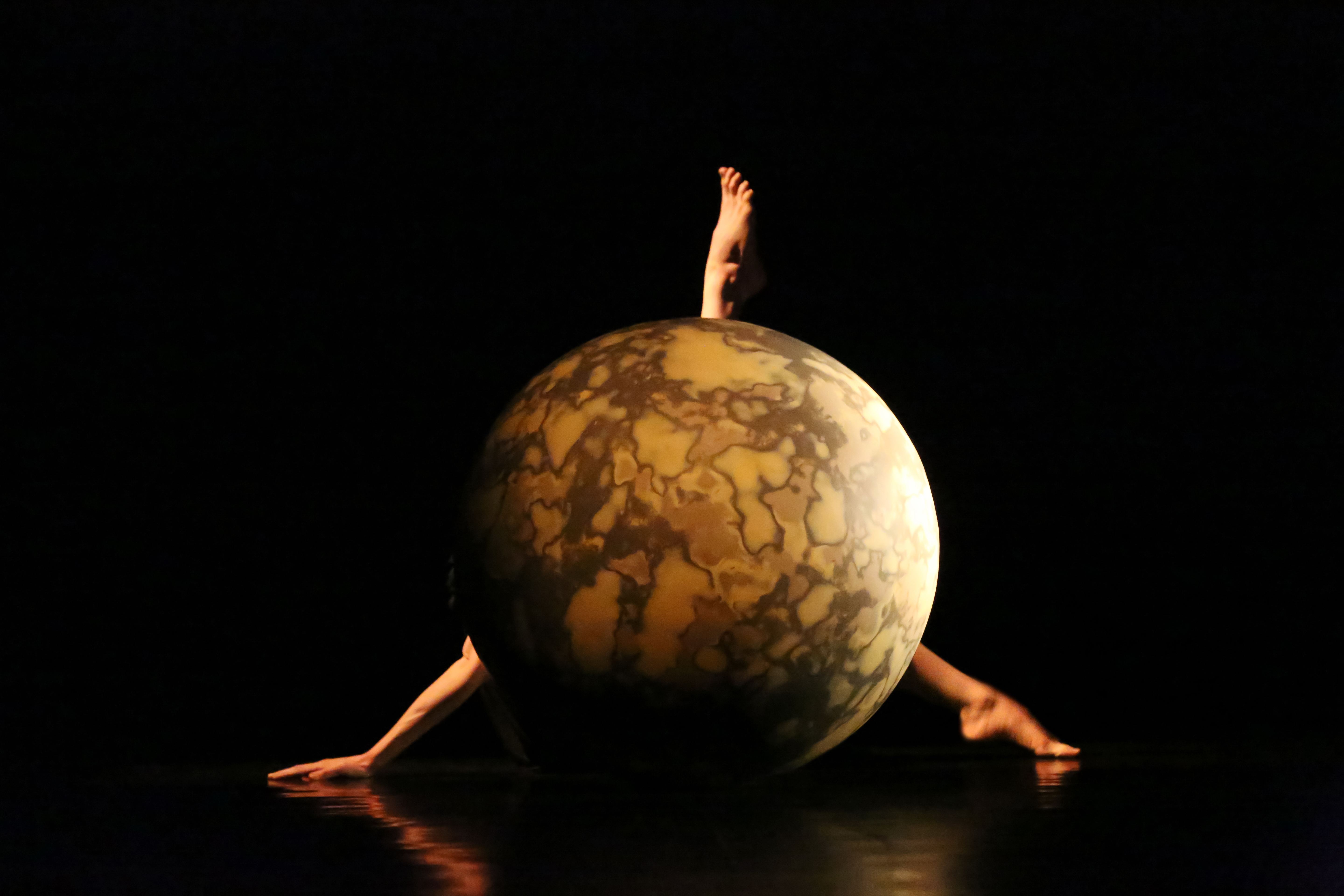 SIXFOLD takes its audience to the beginnings of a world, a different world, where distinctions, normally taken for granted, are yet to be drawn. In between categories and disciplines, with a sculpture by the visual artist and designer Alexander Ruth and music and sound by Phill Niblock and William ‘Bilwa’ Costa, the dancer and choreographer Elisabeth Schilling creates a foreign space of possibilities to be filled by nothing but the imagination.

Schilling thus presents an unusual production between dance and visual art. Initially developed in Seoul and premiered in Luxembourg as part of the festival ‘Les Émergences – Vol. 4’, SIXFOLD is touring Europe from summer 2017. From the Shetland Islands to Cyprus – the piece has been performed 40 times in 9 different countries to audiences who might have never seen dance before to arts professionals. The work has been performed in very diverse spaces: from rocks to beaches, hellipats, traditional theatre settings and galleries.

“…the intensity of her performance holds great resonance. “ Rachel Elderkin, The Stage UK

“a dance work whose beginning has not so engaged since E=mc2 from the 1980“,“ (Elisabeth Schilling) holds life out for inspection, suspending with nothing more than a rigorous physical discipline, our own selves and beginnings “ Jon Seymour, writer

“Fascinating. […] Seeing the piece for the third time I was once again shocked at the new associations I was forming. I cannot let go of the feeling that every time I see this piece something new will reveal itself to me. This speaks for the quality of the piece.” Bernard Baumgarten, Director of TROIS C-L, Centre de Création Chorégraphique Luxembourgeois

“A truly outstanding performance.” Joachim Rodenkirch, Mayor of the City of Wittlich “With a complete and profound depth – it was beautiful, really beautiful. What a great

choreographer! “ Sally Marie, Artistic Director Sweetshop Revolution
“Very rarely have I seen a human being who has moved with such ardency and love to what

they do.” Marlene Schommer
”Like a snail shell of infinite love.” Qui, 9 years old

“The piece is complete in its totality. […] It was abstract in such an extraordinary manner, and executed with such a deep sense of authenticity that one can only achieve if one performs with the whole heart. […].” Christopher Petry

Following its premiere in Luxemburg SIXFOLD is currently touring Europe.

We are currently in the process of organizing further tour dates in Norway, Germany, Belgium and the Netherlands.

Durch die weitere Nutzung der Seite stimmst du der Verwendung von Cookies zu. - By continuing to use the site, you agree to the use of cookies. Weitere Informationen